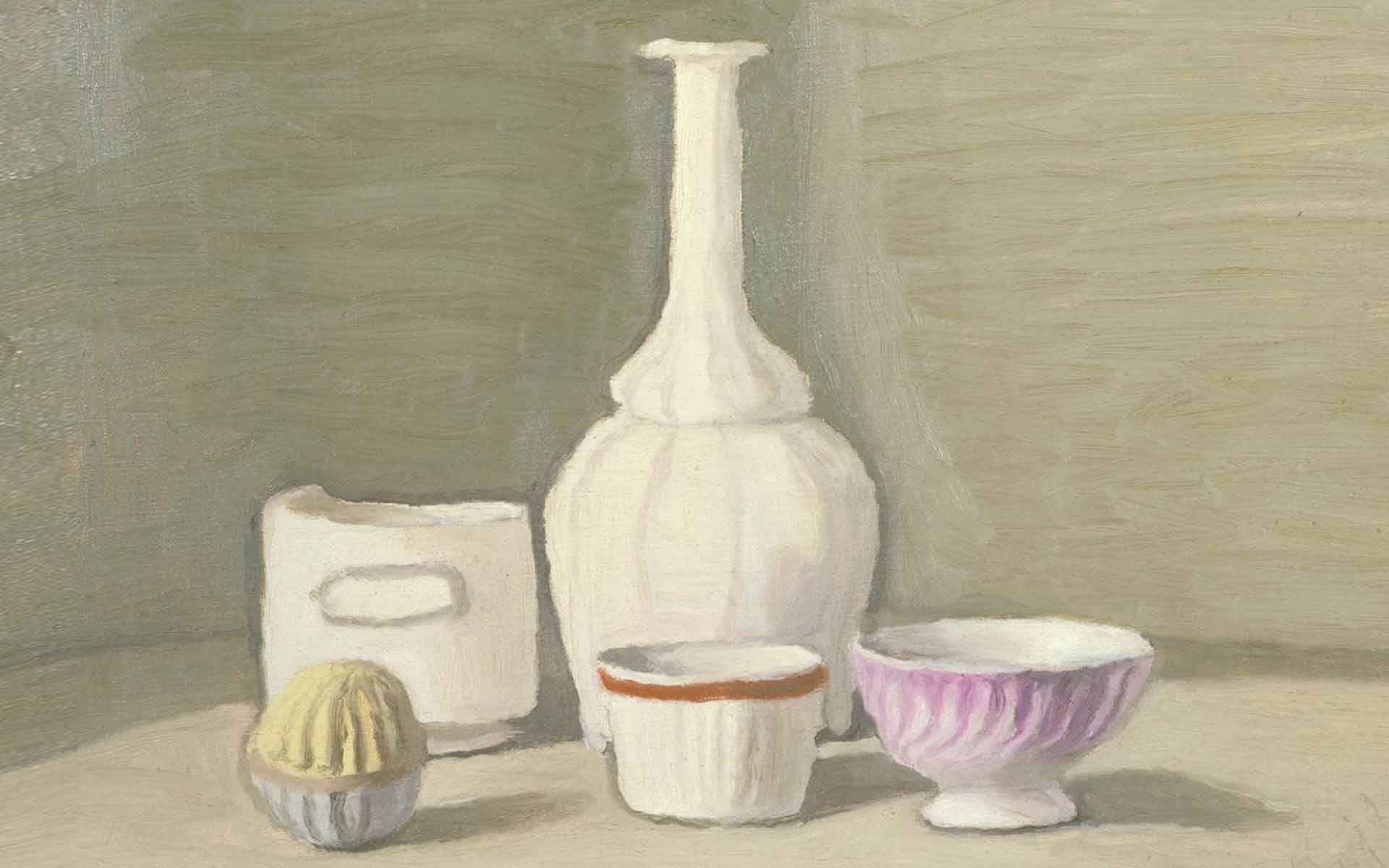 The subject of ceramics in art history opens a door to an entire genre: Still Life art primarily focuses on inanimate objects, from the everyday things in our homes, the beautiful forms in nature, such as fruit, vegetables, plants, skulls and shells from the ocean, as well as man-made objects of metal, wood etc. Still Life became an influential genre in 16th century Western art, proving highly popular amongst the Dutch and Flemish painters well into the 1700s.

Throughout this time, artists utilised various objects as allegorical symbols, certain plants would depict the changing seasons in nature, and along with food, would portray the power of the five senses, especially, scent, taste and touch. It would be difficult to study the genre without becoming knowledgeable in religious iconography, relating to Christ and the Virgin Mary, with so many natural objects portraying purity, virtue and sacrifice. However, in the 19th century, the style of impressionism shunned the traditional symbolism of objects and focused more on the application of colours from nature in broad brush-strokes. No matter what the academies deemed as noble art in the hierarchy of genres, many artists were drawn to still life for its ability to affect the viewer in a down to earth way. Amongst the everyday objects of muse were functional items made from clay. The presence of ceramics in art history tells us many things; ceramic objects are worth our admiration and appreciation, ceramics play a significant role in all of our lives, and ceramics can tell many stories. 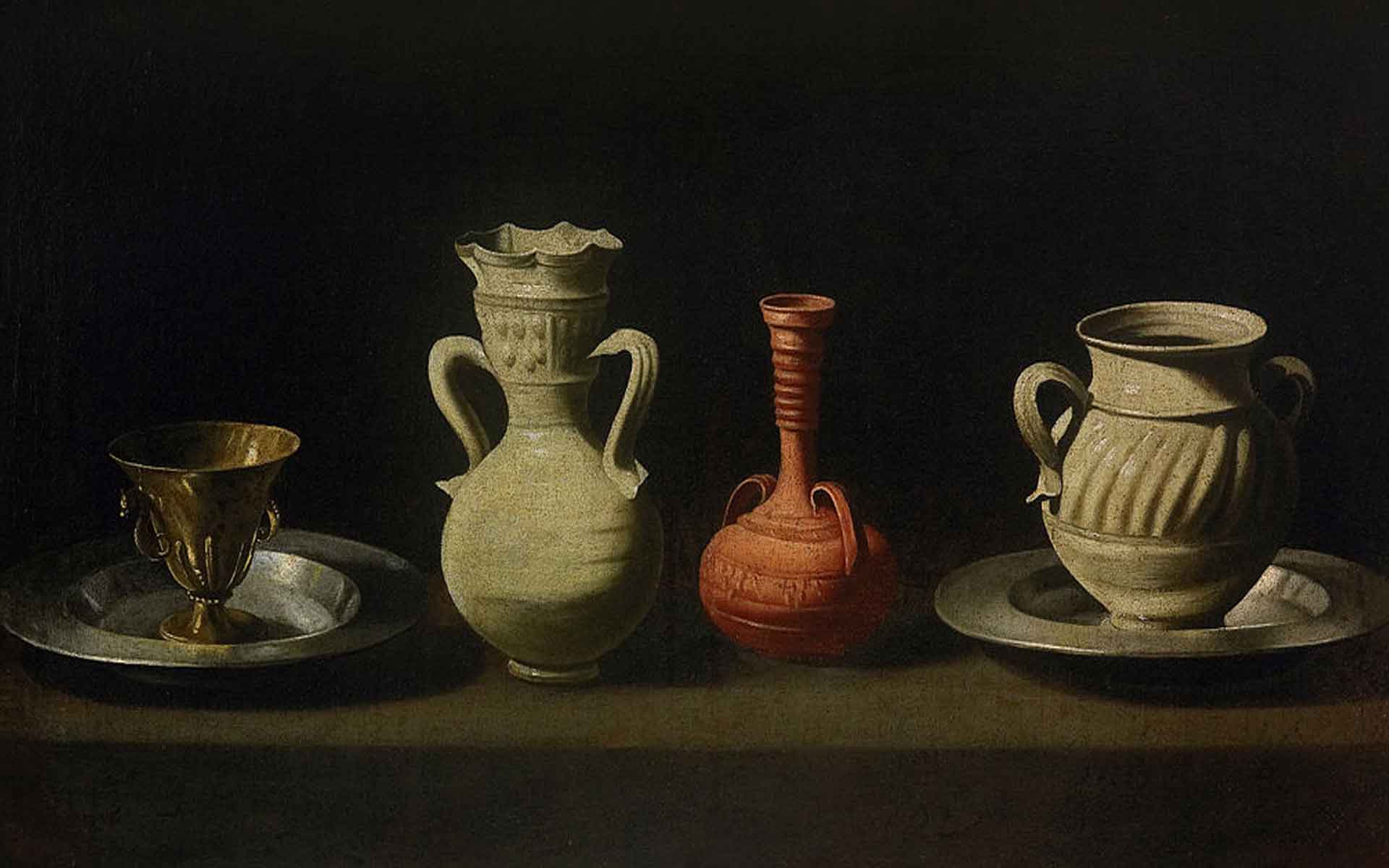 Zurburán’s still life performs much like an ode to ceramics and the beauty of vessels and forms. The artist’s use of strong light, contrasted against the dark background, allows the vessels to take centre stage, fully flaunting their forms and intricate contours. Each vessel appears to have its own glow, its own aura and personality. Many of Zurburán’s painted finishing touches allow the viewer to truly feel the texture and weight of the ceramics, it is a beautiful example of painting during the Spanish Golden Age and can be found in the Museo Nacional d’Art de Catalunya in Barcelona. 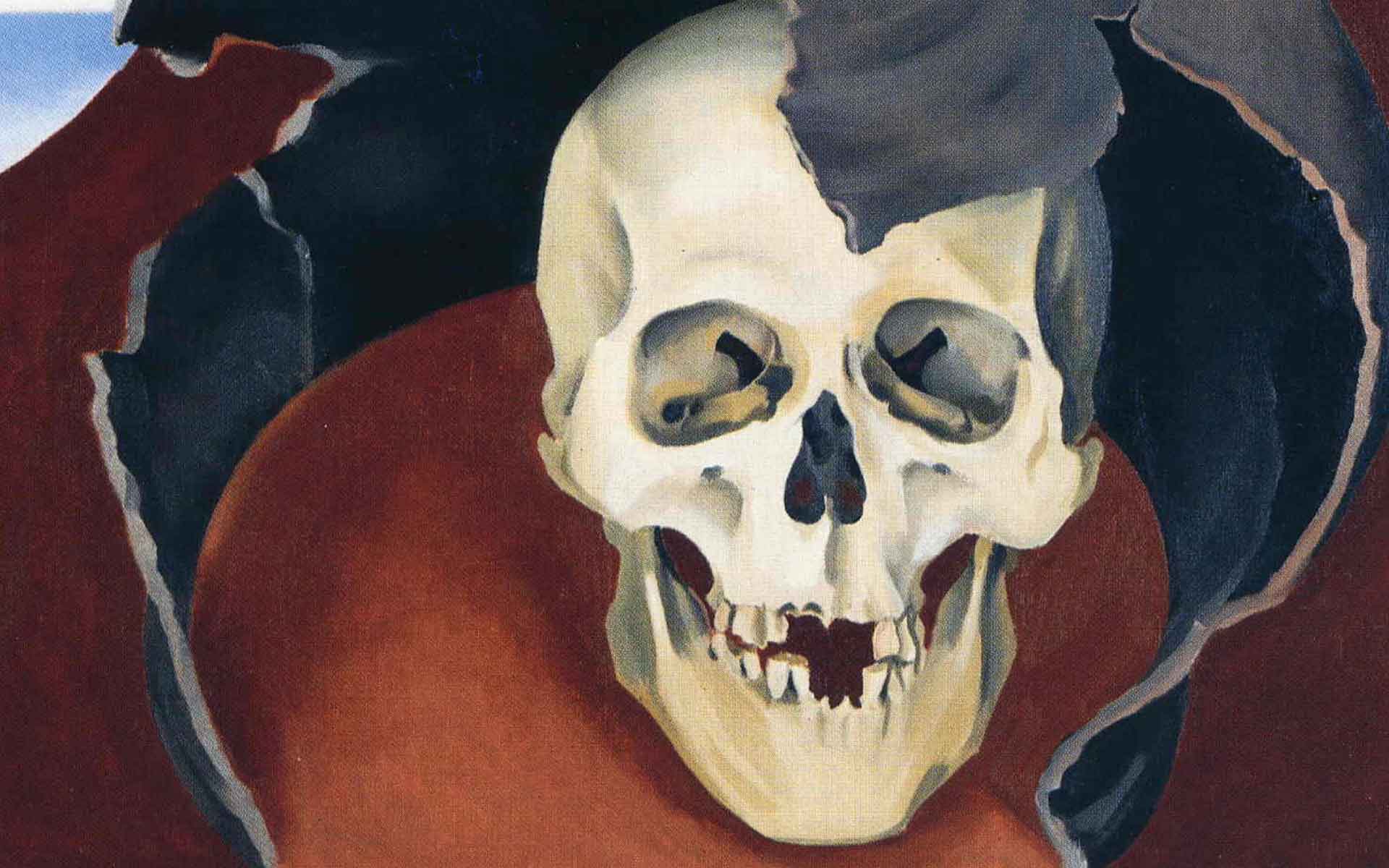 The renowned artist known for her pioneering American modernist style was familiar with painting objects that she found during her long walks in the desert around her home in New Mexico. This still life, ‘Head with Broken Pot’, portrays an interesting relationship between the skull and a broken clay vessel. The two forms complement and add meaning to each other, whilst O’Keeffe’s earthy, natural colour palette helps to convey the essence of her chosen subjects. 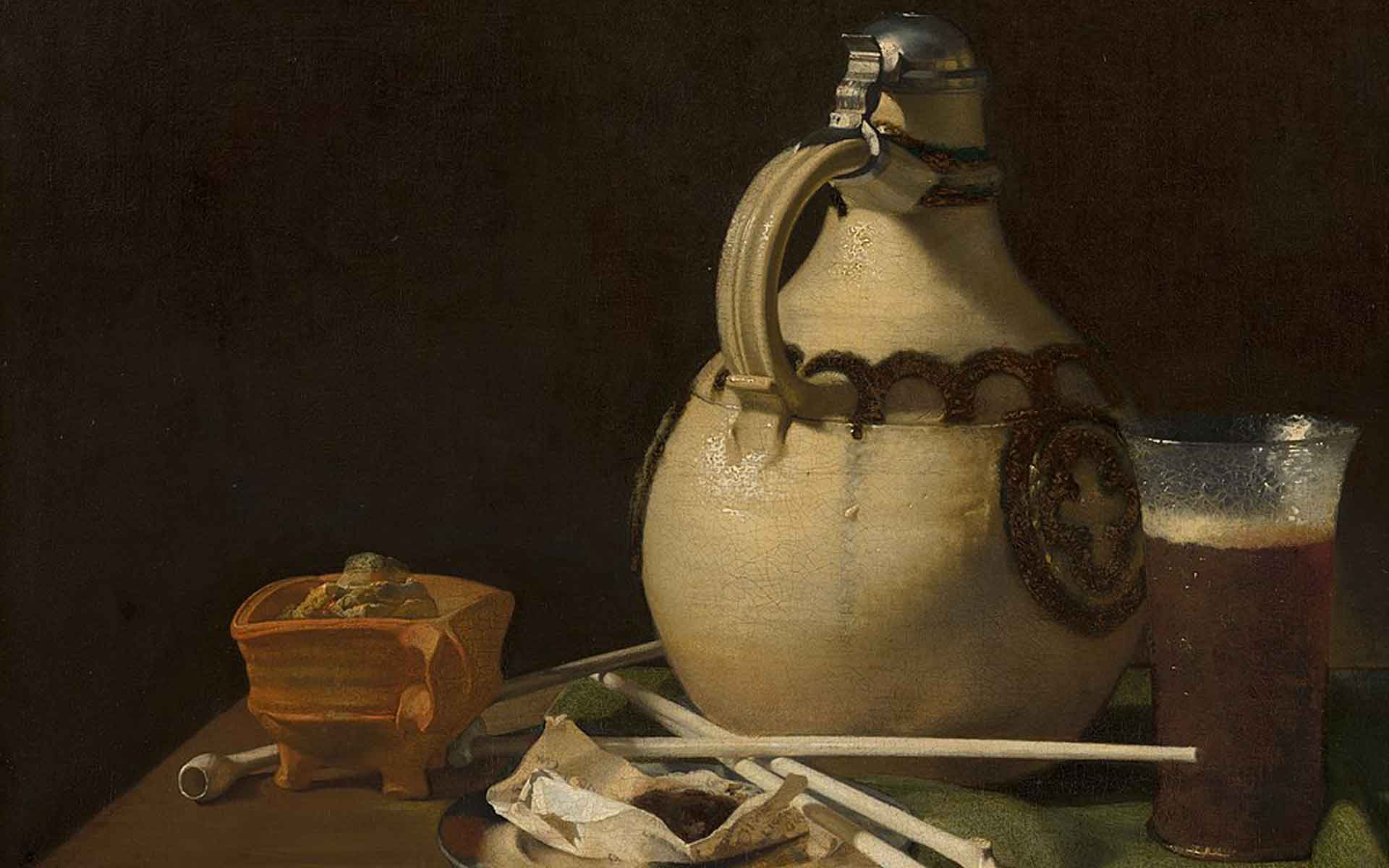 This painting is a beautiful example of Dutch still life painting and ceramics in art history. One can imagine that these objects played a significant role in a 17th century life; the beer, tobacco and jug portrayed with dignity, set in front of a dark background. Notice how Anraedt captures the texture and surface of the earthenware jug, with the subtle glimmer of light reflecting off the jug’s belly and handle. The artist’s colour palette for the jug creates a sense of power and strength in the clay, as the viewer can imagine the sheer weight of the vessel on the table. The artist also chose to include clay pipes in his still life. When tobacco was introduced to Europe in the 16th century, pipes were widely used. Tobacco pipes were often made by hand, although this required a lot of time, however, moulds were also used to reproduce the delicate shape. The long, thin stems were very fragile, they were hollowed out using an oiled wire to allow the smoke to pass through. It is believed that clay pipes offered a ‘pure’ tobacco taste. Here, ceramics lie at the centre of the proud still life, taking ownership and telling a story of ritual and habit in one’s daily life. 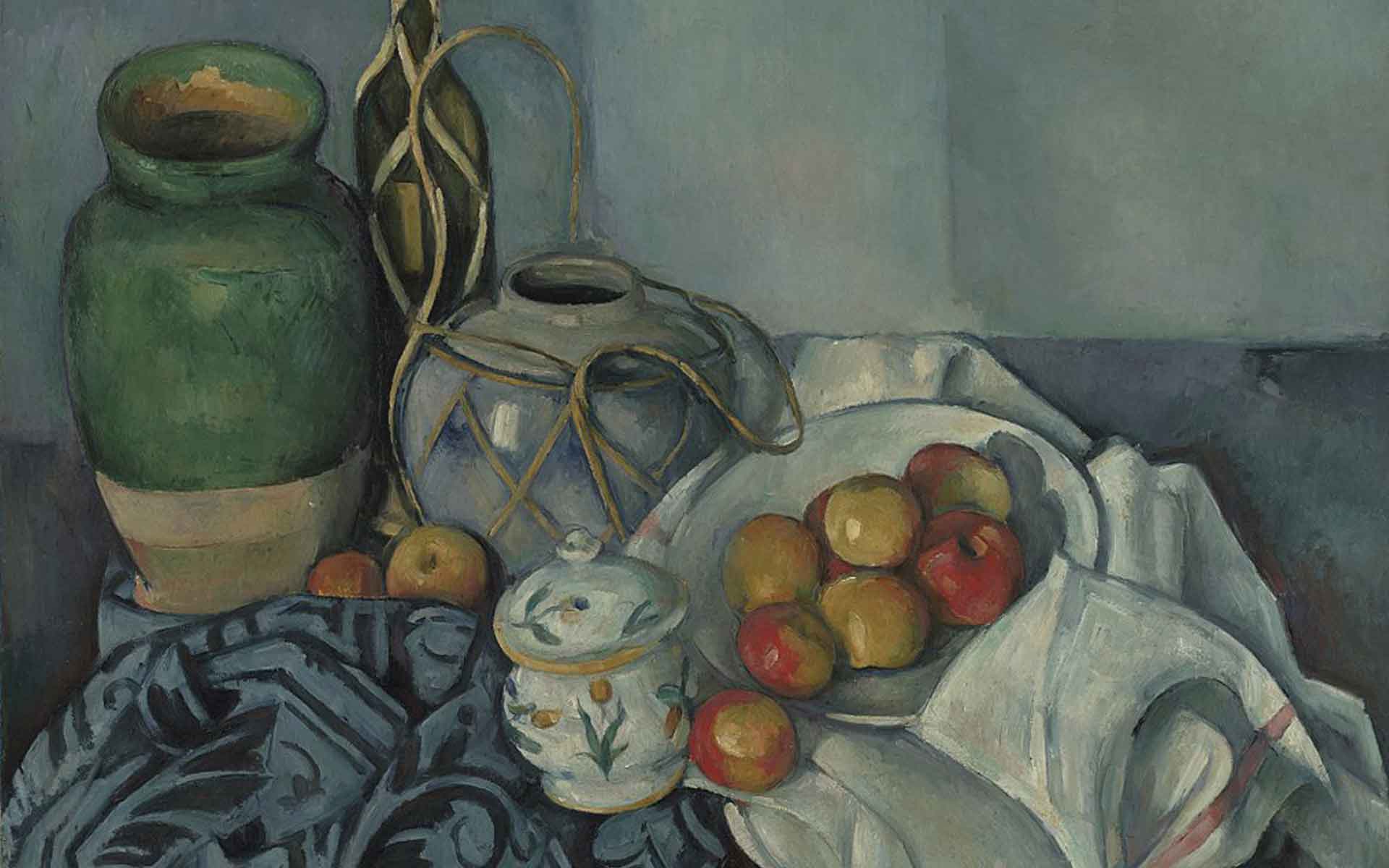 Cezanne’s still life paintings are amongst the most recognisable artworks of the late 19th century. Many of the objects in this painting were favourites of Cezanne’s as he chose to realise them again and again throughout the final 30 years of his life. The green vase and ginger pot were among them. Cezanne ‘locked’ his objects together, controlling the eye of the viewer around the entire painting, from one end to another. The close composition of the ceramics, glass bottle and the apples are a very comforting collection of objects that create an atmosphere of tranquility. Cezanne applies the paint to the green jug in a way that I imagine the ceramicist applying the layers of glaze. 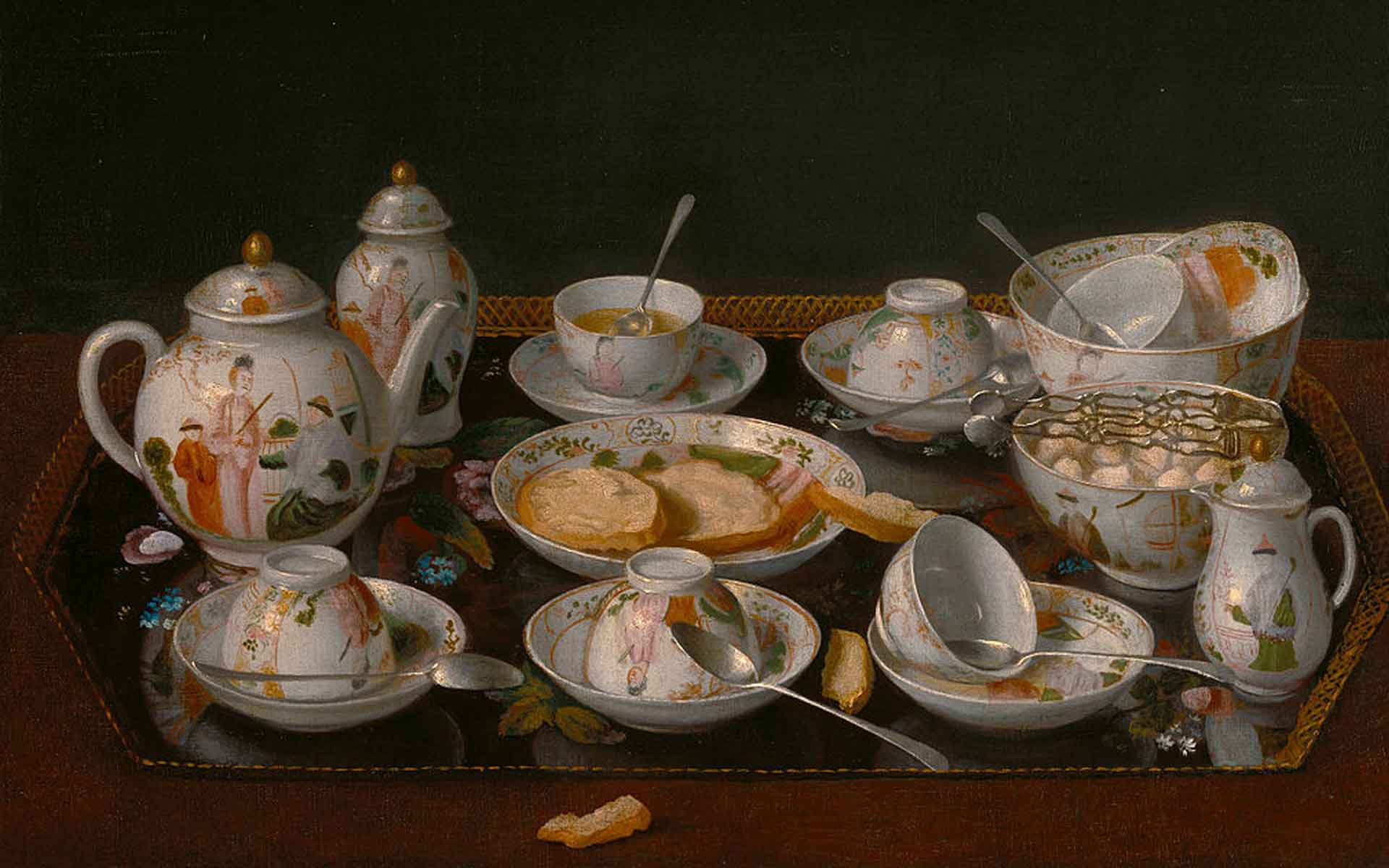 Liotard was a Swiss painter born at the start of the 18th century. The majority of his paintings consist of portraits, however, his still life paintings of porcelain tea sets carry a life of their own, eventually he began to combine the figure and ceramics together. At the time of Liotard’s birth, the tea drinking culture was very fashionable, and Chinese porcelain was all the rage. This artwork is a charming example of porcelain and ceramics in art history.

The still life portrays the action behind a tea party that seems to defy many laws of etiquette.
There are cups, saucers, a sugar bowl, a milk jug and a lidded vase all finely decorated with exquisite hints of gold decoration and detail. Liotard was indeed playful with the composition of the tea set, allowing him to paint the forms in many different positions to capture the beauty of the porcelain. His ability to capture the porcelain’s whiteness, in contrast with the reflective tin tray, breathes life into the static objects. You can view this beautiful artwork up close in very small detail here.

Morandi was an Italian painter famous for his still life paintings featuring mostly ceramic vessels and household objects. He used a distinctive colour palette of chalky pastels, which gave a delicate and calming feel to his still life paintings. Contemporary designer, Sonia Pedrazzini, has created a series of ceramics objects that reconstruct Morandi’s painting, breathing new life into them, whilst celebrating the captivating compositions and forms.

The 137° Ceramic Art Studio offers ongoing weekly classes in wheel throwing and hand building ceramics. Each week, you will have the opportunity to experiment with simplistic and more advanced forms, along with discovering beautiful decorating and finishing skills. You can view our course calendar along with more details about the classes here.